[vc_row][vc_column][vc_column_text]A few weeks ago, the League’s Referee Officer Harvey Newstead, 15, was selected by ‘You Are the Ref’, to be 1 of the 36 referees from across the world to referee at the prestigious pro academy tournament in Sheffield- The Youdan Trophy.

The young referee from Norfolk can expect the standard of football to be high, with the tournament accepting major academy club teams from across the world including Manchester United, Seattle Sounders, Celtic, Rangers and Japanese side Kawasaki Frontale. 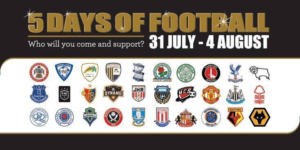 Harvey will also gain invaluable experience throughout the tournament with senior referee coaches present to attend matches and will also be conducting coaching seminars throughout the week. All of Harvey’s matches will be recorded and analysed looking at where he can improve and develop in his performance.

He will also be privileged to work with many other top referees from across the world and get feedback from Ex FIFA and Premier League Referees. To add to this the World’s top referee Mark Clattenburg who is the director of the academy Harvey is part of, will be in attendance to offer support and guidance to the referees and be refereeing the U16 final.

We spoke to Harvey to ask a few questions about his thoughts leading up to the tournament.

How did you react to the selection?

What are you most looking forward to?

The experience. It’s one of those once in a lifetime opportunities which I am really looking forward to but it will have to be the experience of tournament football at a high standard and working with top officials whilst getting feedback and analysis on my performances from senior and ex officials.

What are you looking to get most out of the tournament?

Development and to improve as a referee. I will take it all in and look to take everything I learn away with me. It’s such a massive opportunity so it’s one I’ll take a great deal from.

What do you think helped in your last few seasons to help get you to this stage?

Firstly, getting in vital experience refereeing academy games has helped a lot especially this season taking charge of academy matches between Norwich against, Tottenham, Ipswich, Arsenal and Cambridge with many other academies too.

Also, having a mentor, Glen Sandell, who puts in lots of effort on and off the pitch and after games with me giving me feedback and development tips has been great.

To add, I feel the experience of cup games including two U14 County Cup semi finals working with more experienced referees as an assistant was fantastic along with being assistant on the Premier League Floodlit Cup semi final and refereeing many cup finals here in the county too.

Last but not least, I want to thank my team-mates when working in a three with them this season on games it’s been great to work in a three and developing off each and everyone of them.

How will you prepare for the tournament?

I will prepare normally like it’s any other match however with the tournament being 5 days, and lots of matches each day it will be very demanding so my training and preparation leading up to the tournament is crucial for me to perform at a high level.

As a league we wish Harvey the very best at the tournament and we look forward to hearing his experiences when he returns.[/vc_column_text][/vc_column][/vc_row]